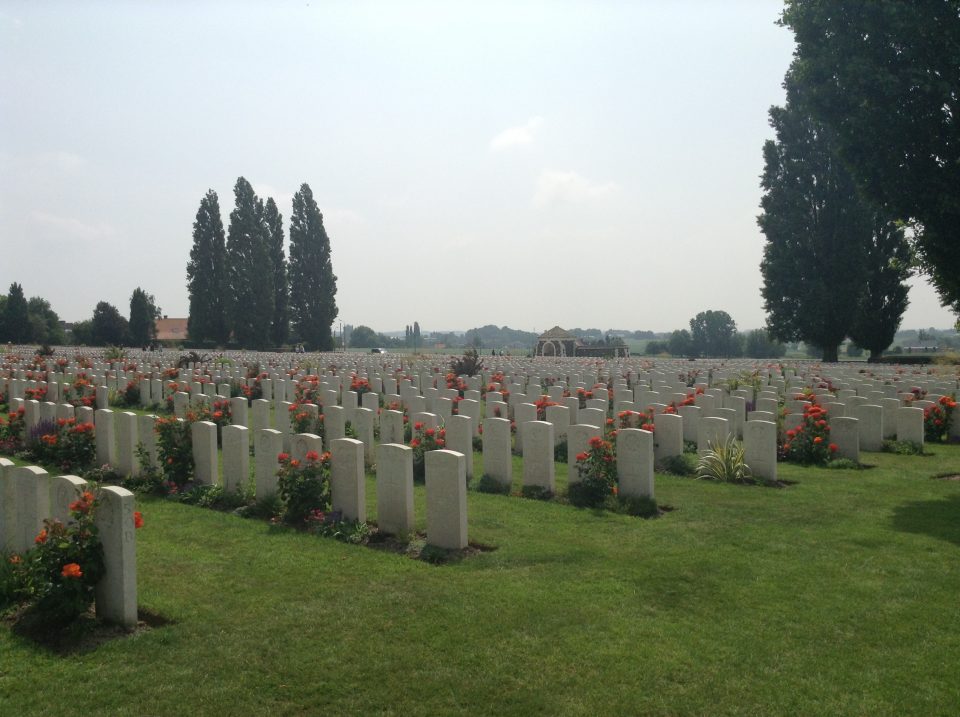 41 children and 6 adults from Wensum Junior School have just returned from a four-day residential trip to France and Belgium. It was the 2017 commemoration of the Third Battle of Ypres at Passchendaele that made us realise that we really had to make the trip if we were to bring the project to a fitting close, allowing our children and staff to visit the final resting place for seven of our lads – including Norfolk’s last VC winner Ernie Seaman – whose names appear on the huge curved wall that forms the back of the cemetery.

We traveled to France on Friday 8th June and arrived at our PGL centre just south of Calais late afternoon. Saturday was spent locally and then on Sunday we traveled over the border to Belgium. Our first stop was the Menin Gate in Ypres. This huge war memorial lists the names of 54,395 British and Commonwealth soldiers who lost their lives in the Ypres Salient and whose bodies have never been found. We laid a wreath to the soldiers from the Norfolk Regiment before bowing our heads in two minutes of quiet reflection. Next we visited In Flanders Fields, the museum housed in the Cloth Hall that commemorates WW1.

We then traveled on to our final stop at Tyne Cot cemetery. Tyne Cot is the largest cemetery for Commonwealth forces in the world, for any war. Neil Storey, our project historian who accompanied us on the trip, led the group to the panels where seven of our lads are remembered. Neil read a short citation for each before a child laid a small cross of remembrance at the foot of the panel. We then laid a wreath for Ernie Seaman, Norfolk’s last VC winner, from the children and families of Wensum and the community of Heigham. In a last act of memorial, each child laid a small cross of remembrance on a grave. Click the link to read Neil Storey’s notes for each man: Tyne Cot Memorial Heigham Lads

It was a genuinely poignant day for children and adults alike. The children – all aged between 9 and 11 – perfectly demonstrated our school values of honesty, kindness and respect throughout.